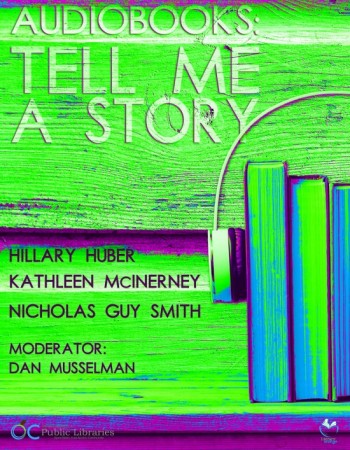 Looking forward to participating in a panel discussion next Saturday at the Irvine Marriott hotel, hosted by Literary Orange–Orange County’s premier literary event, bringing authors, readers and libraries together for a celebration of literature.

The three panelists are all narrators of Penguin-Random House audiobooks. We are scheduled for the second session of panels, which starts at 10:40am, directly after the first keynote speaker and first panel session. Book signing follows at 11:20, with lunch afterwards.

Other panel participants are Hillary Huber who has recorded over 250 titles panning many genres. She is a multiple Audie Finalist, Earphone Award winner, and AudioFile Best Voice. Hillary has a BA in English literature and is a voracious reader and listener of audiobooks. Kathleen McInerney is a classically trained actress and award-winning audiobook narrator (Earphone, Audie, and ALSC Notable Children’s Recording, among others) who has recorded numerous titles by bestselling authors. Our moderator, Dan Musselman, is a Grammy award-winning audiobook producer, and Director of Studio Production for Penguin Random House Audio. He is a producer, director, engineer, sound designer, and talent scout. Dan has designed and built studios to handle the west coast audiobook production for Penguin Audio, Random House Audio, Books on Tape, and Listening Library.