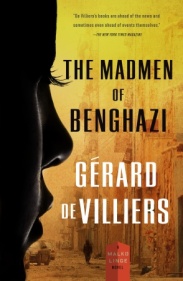 Looking forward to narrating this book for Random House next month. Here’s the blurb:

A gripping, ripped from the headlines espionage thriller set in volatile post-Qaddafi Libya. Featuring Malko Linge, an Austrian aristocrat who freelances for the CIA, The Madmen of Benghazi is the first English translation in a series of novels by Gérard de Villiers, the bestselling French author whose sales exceed 120 million copies, and who has been hailed as France’s answer to Ian Fleming.

To counter the Islamists ready to seize control of post-Qaddafi Libya, the Americans try to establish a constitutional monarchy with Ibrahim al-Senussi on the throne. When a missile narrowly misses al-Senussi’s plane during his descent into Egypt, it becomes clear that someone wants him dead. The CIA sends Malko Linge to Cairo to learn more about al-Senussi’s plans–by seducing his companion, a ravishing British model. This mission, although enormously appealing, becomes very dangerous, as the same conspirators who are trying to kill al-Senussi also take aim at Malko. Malko follows al-Senussi to Benghazi, where they both find themselves facing Abu Bukatalla, the Madman of God, a fundamentalist who sees control of Libya as his for the taking.