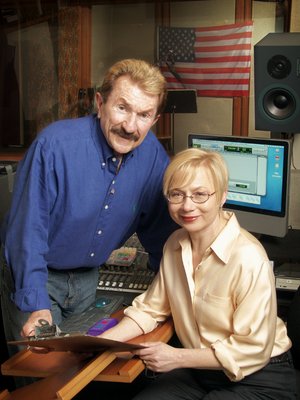 “You have an audition at Kalmenson and Kalmenson at 11:20 tomorrow morning. Are you available? The job is a national and pays $21,000.”

Kalmenson and Kalmenson is one of the top casting agencies in Hollywood, run by a charming husband and wife team who are, quite simply, superb–both professionally and personally. They run the best voice-over workshops that I have ever attended and for one reason alone. Structure. Time is never wasted finding copy for a student. Copy has been carefully organized in advance. Directions are intuitive, far-reaching. At the end of a three hour stint, you leave with pearls of wisdom and a greater understanding of the craft. Yes, their classes are a bit more expensive than others, but well worth it. You will be challenged and in a good way. I took their pros class with Cathy and booked a national promo three weeks later. Easy to say it was because of the Kalmenson method. Maybe. But certainly being directed by Cathy, who knows exactly what needs to be improved, had a lot to do with the booking.

Harvey Kalmenson, or “Da Harv,” is, as my father would have noted fondly, “as sharp as a needle.” Doesn’t suffer fools gladly. Astute and articulate. Might appear a bit tough on the surface, but in reality he is extremely compassionate.  If you are in the booth with Harvey, set aside those initial fears. He is on your side.

An audition at Kalmenson’s represents amazing odds. He auditions a dozen or so people for one job. You almost pray to do so very well just to come back. Again and again.

I’ve auditioned for Harvey for over twenty years, and even though we are extremely cordial, I have yet to leave his recording studio without my heart racing and my lungs longing to draw on a filter-less cigarette, which I once enjoyed. I don’t know why I feel that fear, even now. I know it is usual at auditions, especially with engineers or producers who are strangers. I suppose, deep down, the tension resides in the realization that Harvey Kalmenson, who once worked for Hitchcock, is a master of his game. I have to be a master, too.

Upon arriving in his waiting room with at least 15-20 minutes to spare, I will pick up the copy, glance at it for a few seconds, then head to the restroom. There are two. One is in the main waiting room; and if anyone is present, they can hear you pee. Not good, even with the fan reverberating. I usually head for the second restroom, hidden around the corner next to a smaller recording bay, which is rarely used. The restrooms, I must add, are impeccable. Lots of paper towels available to wipe your hands, and many photos of the giants on the walls.

Within a minute of my return to the waiting room, Harvey will invariably approach me (he saw me coming in) and ask if I’m ready. No. Need more time, I say smilingly. And off he goes. I don’t leap into that studio. No point. Harvey rarely supplies copy beforehand. You have to read it in the waiting room. And those twenty minutes of reading time are critical. Get out your pen and start annotating. If necessary, go outside and read aloud.

If no one is in the waiting room and I am ready to record, I will usually chat with Harvey about politics, or his latest blog, the two often being invariably related. It’s very clear to me that he is one of most widely read men in Hollywood, and certainly the most articulate. He can quote, provide literary references, and persuade. I often think of his job as a casting director as something he does on the side. He is fueled with such intense passion about what needs to be put right in the world that you almost want to sign up right there and do something about it. He is that persuasive.

At the end of our brief conversation, he might inquire if I have read his latest blog. Then we will go into the studio, and he will adjust the mic, then go into his booth, and announce, “Slate your name and I will point you…” And he does. And you read. And then it’s over. “I’m a happy camper” is the usual refrain. “Nice seeing you.”

It all seems easy, most of the time, but there is always that overriding question afterwards.  Did it work for Harvey? You may not get the job, but if Harvey Kalmenson recognizes your choices in the reading, he will invite you back, and that, essentially, is significant. With all his years of working with the very best, Da Harv recognizes what works, even if a producer has another idea.